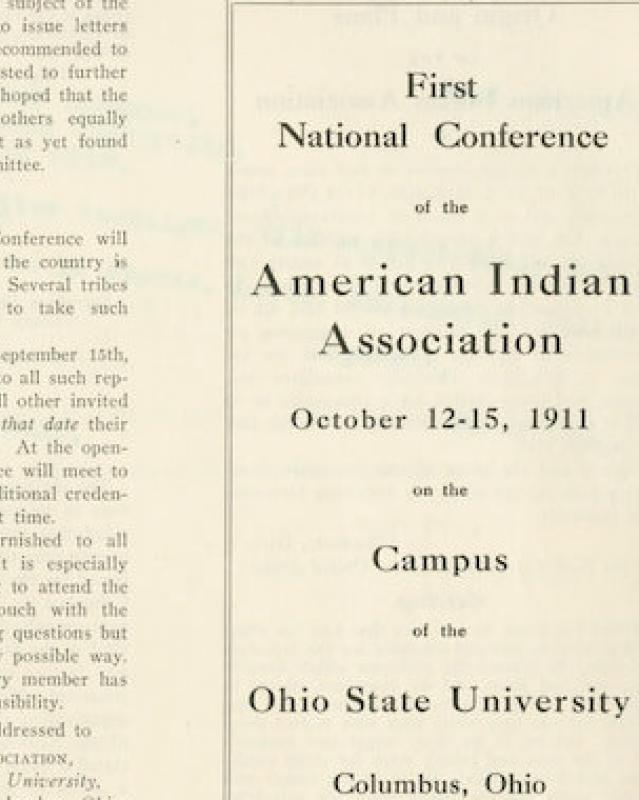 An extraordinary panoramic photo from October 1911 shows nearly all the 50 or so delegates to the first conference of the Society of American Indians.

Arrayed in two rows before a building on the Ohio State campus, they’re dressed in the conservative suits and long skirts of the time, with one exception. Front and center sits a woman in tribal garb, with braids flowing to her waist. The caption identifies her as Nora McFarland.

Absent from the photo, not surprisingly, is Fayette Avery McKenzie, founder of the Society of American Indians and the driving force behind its first and subsequent gatherings at Ohio State and elsewhere. A white man and a longtime advocate for Native Americans, McKenzie believed the society and its conferences should be run “by Indians, and for Indians.”

Portrait, First Conference of the Society of the American Indians, 1911

McKenzie was already well known for his progressive views by the time he arrived at Ohio State in 1905 as an assistant professor of economics and sociology. The first American sociologist to specialize in Indian affairs, he had lived among Native Americans in the western United States and saw firsthand their cultural and social achievements as well as the tragic effects of forced relocation and other government actions. McKenzie’s work helped counter popular notions that the natives were biologically inferior savages.

As reformers sought to change restrictive policies affecting American Indians, McKenzie became convinced that an association organized by tribe members but supported by influential whites was necessary. In April 1911, at McKenzie’s invitation, six highly educated Native Americans met at Ohio State. Out of that meeting came the American Indian Association, later renamed the Society of American Indians, and the announcement of a national conference to be held on campus that October.

In a letter to Thompson, McKenzie invited the president to become an associate member of the organization. “We owe it, do we not, not only to the native people but also to ourselves to demonstrate an efficient friendship for the Indian,” McKenzie wrote. “The greatness of nation and of self is measured in the ability to see beyond race lines.” Local dignitaries and others also attended the first conference. According to the Lantern, the delegates discussed ways to counter “existing evils and to raise the standard of the red man.” 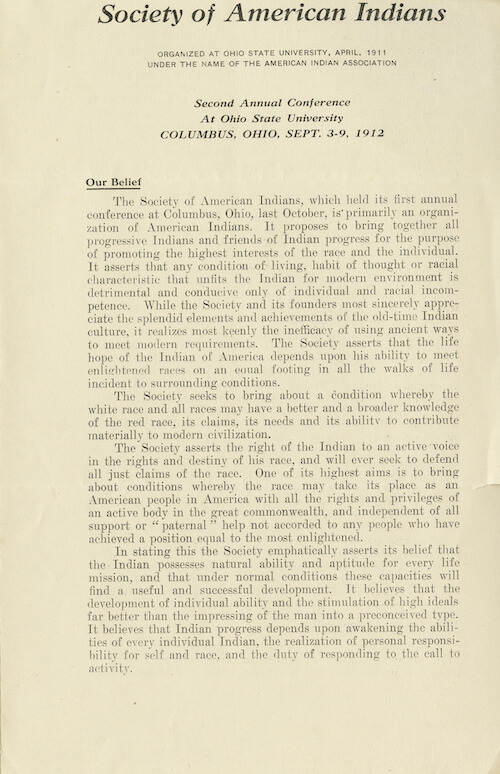 “The people at that first meeting were on an urgent mission to protect their families and their tribal heritages at a time when American Indians were being overwhelmed by unrelenting waves of immigration, settlement and urbanizations, technological change, and the taking of tribal territories through political and military means,” says Marti Chaatsmith, the university’s former director of American Indian Student Services and now associate director of the Earthworks Center at The Ohio State University Newark campus.

When McKenzie wrote to Thompson to announce the second conference the following year, he appealed to the president’s pride in the university: “By appropriate action the Ohio State University might take its place as one of the distinctive centers engaged in the solutions of the large race problems of the country.”

"We owe it, do we not, not only to the native people but also to ourselves to demonstrate an efficient friendship for the Indian...the greatness of nation and of self is measured in the ability to see beyond race lines."

In 2011 the university hosted the Society of American Indians Centennial Symposium, a gathering of prominent scholars representing many tribal nations. “It was an opportunity for us to reassess the legacy of the first American Indian rights organization in the nation,” Chaatsmith says. Journal articles published after the symposium examined more closely the intentions and actions of the Native American intellectuals who had met in 1911.

“There had been some critique of them by scholars, saying they were sellouts,” Chaatsmith says. “The nuanced perspective that arose from the symposium reinforced that these early advocates were looking for political support and help in developing social remedies to ameliorate the desperate situation that American Indians were experiencing at the turn of the century.”