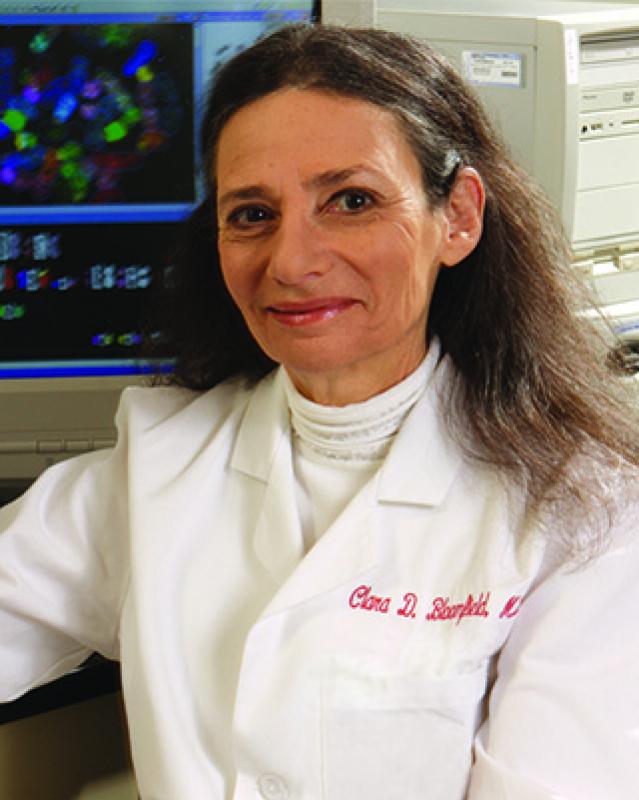 When Clara D. Bloomfield, MD, passed away at 77 in March 2020, she was mourned and honored internationally. She’d been one of the world’s leading blood cancer researchers — a luminary who’d ushered in what’s known today as precision medicine, thanks to her work with adult acute leukemia.

“She will be remembered as a pioneer in the study of hematologic malignancies — particularly acute myeloid leukemia — whose research led to breakthroughs that have improved treatments and enhanced quality of life for many patients with these diseases,” said Dr. Raphael Pollock, director of the Ohio State University Comprehensive Cancer Center.

Despite her brilliance, it wasn’t Bloomfield Ohio State had wanted to recruit to its faculty, but her husband, Finnish geneticist Albert de la Chapelle, MD, PhD. That was in 1997, when bias generally existed against women in the seemingly male-dominated field of medicine. Upon de la Chapelle’s suggestion, Ohio State recruiters began looking at Bloomfield, eventually offering her a position — albeit a lesser one than she already held at State University of New York at Buffalo.

“The position they wanted me to come and look at was head of hematology/oncology, not head of the cancer center” Bloomfield later told an interviewer. “I was already head of a department of medicine. Why would I be interested in division head?” But Bloomfield’s mother, an attorney, and father, an economics professor, had instilled in her a foundation of feminism and strength. “I think growing up in academia and the roles of my parents were probably the most important things in terms of helping prepare me for an era when few women were in academic medicine,” she said. “Women were mostly discriminated against. It’s something that, if you were going to be successful, you had to overcome.”

"Women were mostly discriminated against. It's something that, if you were going to be successful, you had to overcome."

Bloomfield took the position, but measured herself against her own aggressive benchmarks. She took the struggling cancer center and turned it into a highly successful, comprehensive program — one that raised the bar for care and research, and drew more than 350 physicians and scientists to continue cancer-fighting advancements. She would also push for the $1.1 billion cancer hospital, The James, that stands today as a beacon of hope.

From her first day at Ohio State, Bloomfield had been clear in her convictions. At her first staff meeting, she said, “One year from today, every one of you will be subspecialized or you will be gone.” It was a controversial move, to be sure, but one that demanded accountability and proffered excellence locally and far beyond.

Besides, Bloomfield wasn’t shy. She wasn’t afraid to question researchers on their data during presentations or push recruits and mentees toward ever-superior clinical care. “You’ve got to look at what you see as the data and deal with it, and not be afraid to publish things that no one agrees with,” Bloomfield said. Bloomfield would arrive at work before sunrise and would challenge any obstacle in her way. In fact, she was publishing up to the month before she passed away.

This drive led Bloomfield to extraordinary achievement: Her pioneering work on acute myeloid leukemia led to genetics being included in the diagnosis of acute leukemias in the 2001 World Health Organization classification and in the most widely adopted clinical practice guidelines in oncology — those of the National Comprehensive Cancer Network.

Bloomfield was also the first woman to receive the Joseph H. Burchenal Memorial Award for Outstanding Achievement in Clinical Cancer Research from the American Association for Cancer Research. And she was the first faculty member holding a medical degree to be named an Ohio State University Distinguished Professor.

The quality and importance of Bloomfield’s work were reflected in her decades of continuous funding from the National Institutes of Health as principal investigator, her authorship of multiple review articles and chapters in leading textbooks, and in the more than 600 peer-reviewed articles she authored or co-authored in major scientific journals.

And she relentlessly furthered women in science and medicine through her active mentorship of more than 100 women. She served as a role model and advocate for university policy guidelines on equal employment and advancement for faculty women. For all of her personal awards and accolades, she considered one thing to be the pinnacle. “What I’m most proud of is the progress that we’ve made academically in terms of cancer,” she said. “We still have a ways to go, but it’s been a big change.”