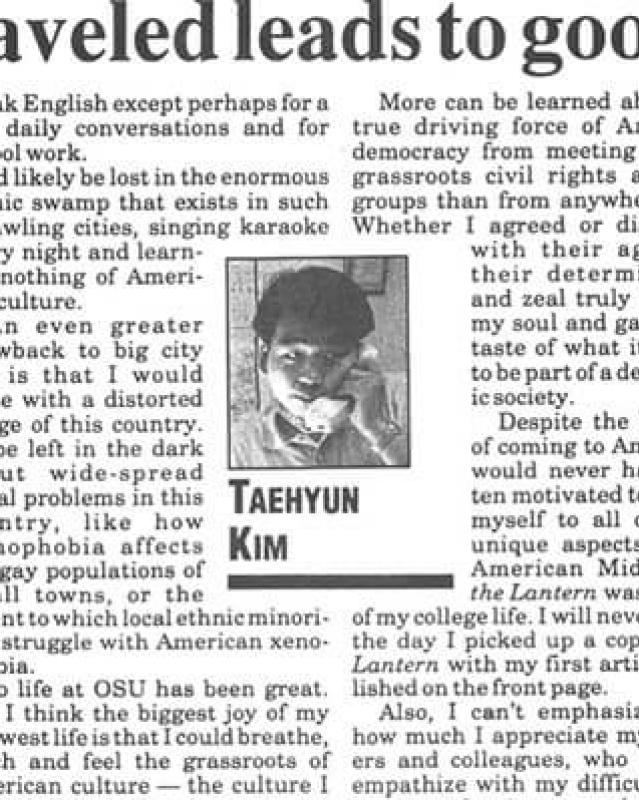 A Strong Voice for Students

A longtime Lantern editor, Taehyun Kim expanded coverage and awareness on international students and the problems they faced while also finding his voice and passion in the process.

“Why did you decide to come to Ohio State?”

For international students, it can be more than a casual question, a conversational ice-breaker. They may have grown up half a world away, where cheering for the Buckeyes since childhood or exploring High Street as curious teenagers wasn’t a part of their experiences. Their stories are as varied as they are.

Taehyun Kim came from Seoul in 1990 hoping to study journalism. “Journalists were superheroes,” he says. “South Korea had been under a military dictatorship during the 1980s, and I saw firsthand the crucial role the Western press played in documenting the truth. Western journalists were more powerful than the dictators, and I wanted to be one of them.” Although Kim could read and write English, his ability to understand the spoken language and speak it himself was limited. Achieving his goal, he says, “didn’t seem remotely possible.”

But by the time he graduated in 1995 and entered the master’s program at Ohio State, Kim had become the first international student to hold editorial positions at The Lantern for more than a year. Kim, now an associate professor of journalism at California State University, Northridge, began as a photojournalist. “I roamed around campus, High Street, downtown Columbus,” he recalls. Two of his earliest photos in The Lantern were of Russian folk dancers and Japanese calligraphers at an international festival in 1993.

He turned his lens on Star Trek reenactors, a hot dog vendor, a demonstration by Native Americans at the Statehouse, former secretary of state Henry Kissinger—speaking at a student event—and the rhythm of everyday life on campus. Along the way he became The Lantern’s assistant graphics editor, assistant photography editor, and finally photography editor. The tentative writer who had been unsure of his mastery of English became a reporter and then a columnist who wrote movingly of his journey and of the problems that international students faced.

"I think the biggest joy...is that I could breathe, touch and feel the grassroots of American culture..."

“I felt compelled to cover the issues they were dealing with,” Kim says. “They didn’t have a strong voice on campus.”

In November 1994 a graduate student from South Korea committed suicide in Morrison Tower. A few months later another graduate student hung himself in his apartment. “Forgive me if the following column is too cranky and emotional,” Kim wrote after the second student’s death, “but I don’t know any better way to express my sadness, outrage, and fear.”

Balancing the question of students’ personal responsibility for their mental health and his own feelings of despair, Kim called on the university for increased resources and understanding for international students and their struggles in a foreign culture. Administrators did follow up, says Kim, who coordinated a forum for faculty members and international students to discuss the problem. Among other actions, the Office of International Education increased counseling services for students. Kim recalls few other international students working on The Lantern in the early 1990s. That’s not the case today, says advisor Spencer Hunt, who supervises a large editorial staff as well as students in his practicum class and numerous freelance reporters. And while Kim often wrote of issues close to his heart as an international student, today’s reporters are likely to cover a variety of topics. “It comes down to what they feel most strongly about,” Hunt says. “International students and diversity issues are among our beats, and if they’re drawn to those subjects, they could do that.”

In his last column as an undergraduate, Kim reflected on his time at Ohio State: “I think the biggest joy … is that I could breathe, touch and feel the grassroots of American culture. … Whether I agreed or disagreed with [the] agendas of [grassroots activists], their determination and zeal truly touched my soul and gave me a taste of what it means to be part of a democratic society.”

A 1995 Lantern article written by Taehyun Kim reflecting on his time and experiences at Ohio State.
Explore More Stories