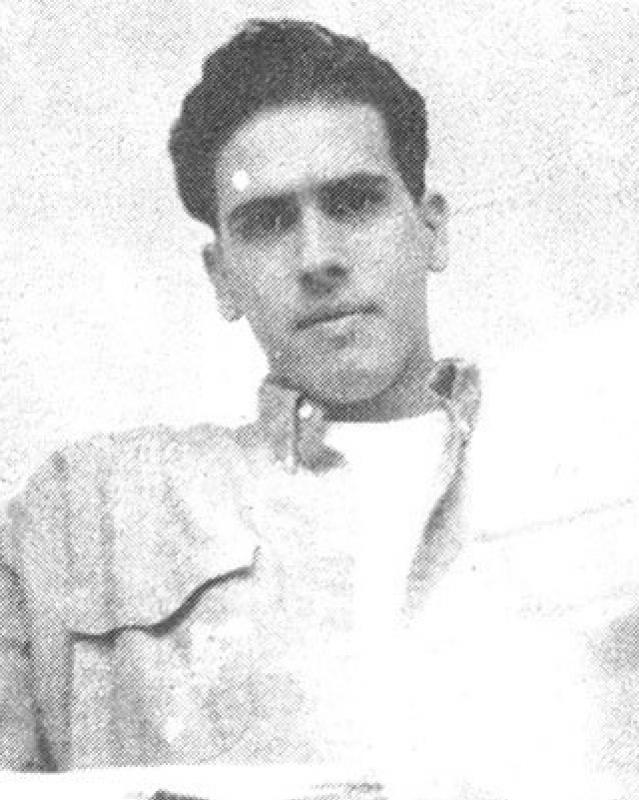 Dorm life for many Buckeyes is about hanging out and exploring fledgling autonomy. For two gay roommates in 1989, however, their floor in Bradley Hall became a front line for battling homophobia and intimidation—including death threats.

The two second-year students, Michael Scarce, BA ’93/MA ’95, and Tom Fletcher, had hung a poster outside their third-floor room celebrating National Coming Out Day in October. Fletcher was president of the Gay and Lesbian Alliance, a student organization supporting the university’s 5,000 or so gay and lesbian students. The national event had been created the previous year to commemorate the October 11 anniversary of the 1987 National March on Washington for Lesbian and Gay Rights and promote awareness of LGBTQ+ civil rights.

Their floormates responded to this benign act with vicious hostility. The words “No faggots” appeared on a wall, written in shaving cream. Other hateful messages were left on bathroom mirrors. Scarce and Fletcher received phone calls with death threats. For months, the roommates reported the incidents to Residence and Dining Halls, but the menacing harassment continued for nearly the entire academic year.

"Our civil rights have been stripped from us by other bigoted, prejudiced, homophobic students who believe they can do these things to us and get away with it."

Finally, fed up and with nowhere else to turn, Scarce wrote a letter to The Lantern that was published Wednesday, May 23, 1990:

“For the last seven months my roommate, Tom Fletcher, and I have lived on the third floor of Bradley Hall on south campus. It has been the single most unhealthy and uneducational environment I have ever experienced. Since late October 1989, we have been verbally abused, threatened, intimidated and harassed continuously because of our sexual orientation.

“Our civil rights have been stripped from us by other bigoted, prejudiced, homophobic students who believe they can do these things to us and get away with it.

“The university has taken no direct action against our floor or the identified individuals involved. We have become fair game for anyone who wants to take shots at us, for obviously the university condones and tolerates this activity against gays and lesbians.

“We realize you must work within the system you function in, but the system itself is so homophobic and so racist that it only perpetuates the problem itself.

“The university has until 5 p.m. on Tuesday, May 29, to begin educational, disciplinary or legal actions to correct this situation and produce immediate and tangible results to our satisfaction, or we will be forced to implement our own strategy and deal with our situation in ways we see fit.”

The evening before the letter ran, university administrators delivered letters to the men on Bradley Hall’s third floor stating “serious action” would be taken if the harassment did not cease. Within hours, Fletcher and Scarce found 15 of those letters stapled together and taped to their door, the words “Die fags” written across them. 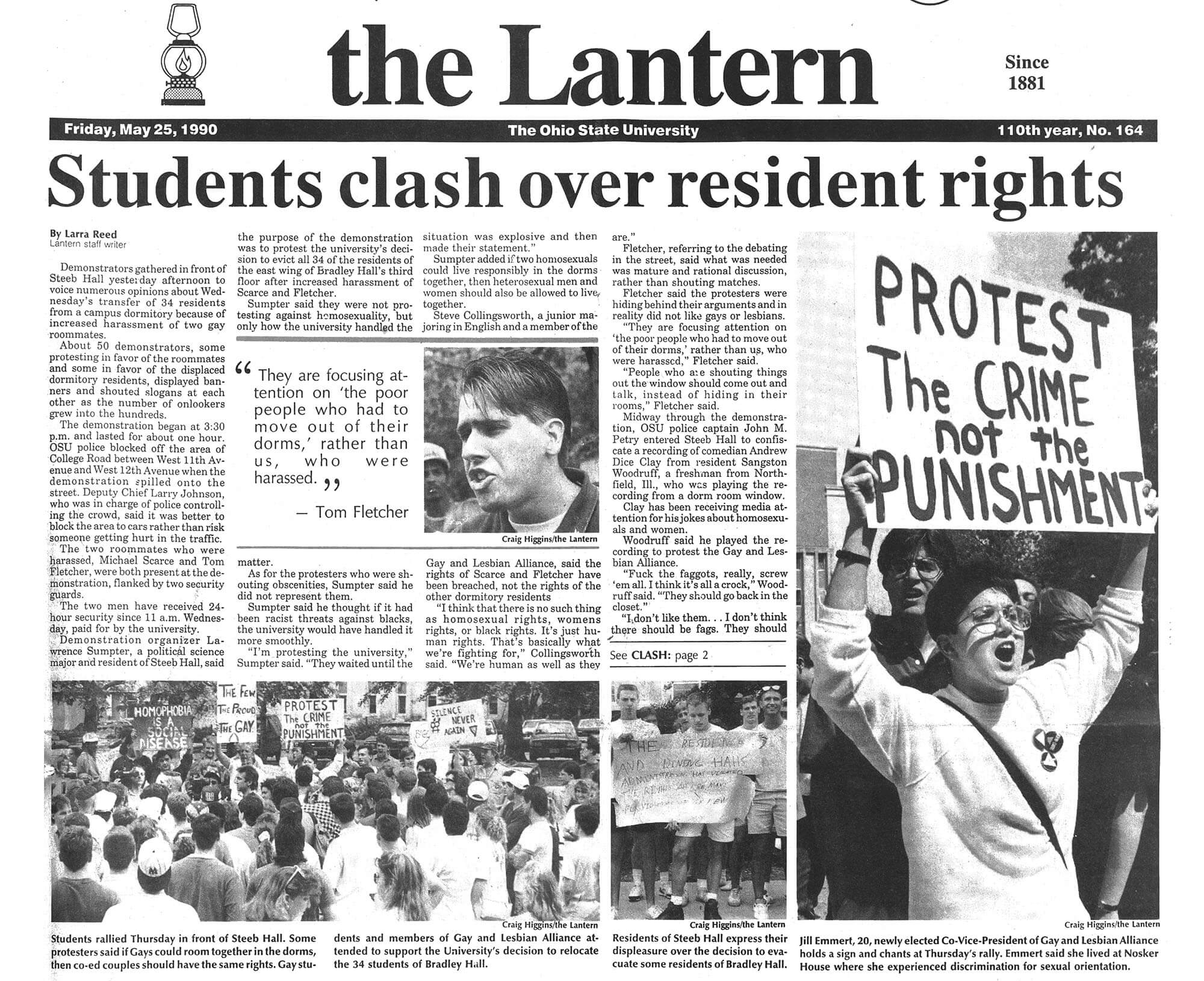 Early the next day, the university closed the third-floor men’s wing. An emergency floor meeting was called, and the 34 residents were instructed to pack their things and relocated to other residence halls across campus. Fletcher and Scarce were moved to off-campus housing and assigned private security.

Some of the floor’s other residents indicated to The Lantern that it was they who were the victims of injustice. “I could see if someone was beating them up. All (the floor residents) are doing is putting stuff on the door,” resident Adrian Plesha was quoted as saying in the May 24 issue. “All you do is take it down and ignore it. You don’t call the police.” Another student, Chris Hadden, told The Lantern, “This is really childish. We were not given our say.”

The next day, some of the evicted men staged a protest outside Steeb Hall. Organizer Lawrence Sumpter told The Lantern that they were not protesting homosexuality but rather how the university handled the matter, but protestors shouted anti-gay obscenities, and police confiscated a recording by Andrew Dice Clay—a comedian known for his anti-gay and anti-women act—from freshman Sangston Woodruff, who told The Lantern he was playing it to protest the Gay and Lesbian Alliance.

“They are focusing attention on ‘the poor people who had to move out of their dorms,’ rather than us, who were harassed,” Fletcher said in The Lantern. William Hall, director of Residence and Dining Halls, stood by his decision to close the men’s wing. “I absolutely think it is the right thing to do,” he told The Lantern. “The silence says we support these kinds of things.”

With their fierce and persistent determination, Scarce and Fletcher were examples of what Michael McFadden, then-president of Stonewall Union of Columbus, called a “new activism.”

“We’re seeing more of a willingness from gays to be visible and not to take ‘no’ for an answer from officials,” McFadden told The Lantern. “Universities are just like other institutions that live by ‘law of least effort.’ If they feel it’s easier to ignore something, they very likely will. Fortunately, Mike and Tom have made it more difficult for the university to do that now.”

Indeed, as the result ongoing activism by Fletcher, Scarce and many other Ohio State students, faculty and staff, the university has evolved. Its support for LGBTQ+ students, including gender-inclusive facilities, coming out support, counseling and career resources, has made Ohio State the No. 2 most LGBTQ+-friendly university in the country, according to College Choice.

Scarce, who would go on to become president of GALA, one of the first two gay students named to Ohio State’s Homecoming Court, and, following graduation, coordinator of the OSU Rape Prevention Program, told The Lantern that the two friends fought for not just their own safety and rights, but for all LGBTQ+ students, present and future.

“Gay and lesbian students living in residence hall) can now say ‘We have a system behind us, and there is a way for us not to be living in terror constantly.’”