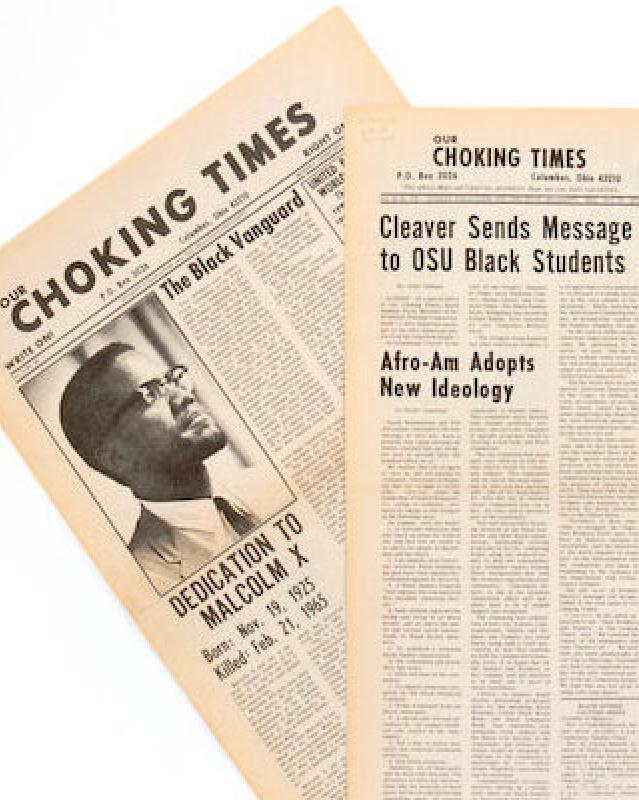 An Outlet for Black Student Self-Expression

When the 12-page inaugural issue of the Our Choking Times newspaper first hit Ohio State’s campus in February 1970, it did not mince words. And for good reason: Black students at the university were still reeling from the injustices that had rocked campus just two years prior, when 34 students were indicted on kidnapping charges for their peaceful protest of racist policies at the university. This first issue of the newspaper sought to provide a community forum and address those frustrations of black students across the university.

“Ohio State is a microcosm of America,” read the opening salvo of “Our Choking Times Manifesto.” “The University is one of the petri dishes that breeds the social cancer—racism.” The statement listed demands of the university that included a dedicated recruitment program to bring more black students to campus, equitable funding for black student organizations, establishment of a degree-granting African American studies department, and more.

The manifesto set the tone for the paper’s activist ethos, holding Ohio State accountable for its lack of black professors and students, its lip service to diversity, and later, its investment in companies doing business with apartheid-era South Africa. Many of the issues the student-writers addressed, such as Columbus police offers shooting unarmed black citizens, continue to be serious problems today.

Beyond its critical commentary, Our Choking Times offered a much-needed communal media space as the only publication written by black students for black students. The paper published poetry and cartoons, as well as music, theatre and literary criticism. It gave black students an outlet for expression. In addition to the printed publication, it offered a hotline with three minutes of news updated daily, with the opportunity for callers to leave a message with their thoughts. This feature was eventually disabled when the messages became filled with racial slurs directed at the student writers and editors. 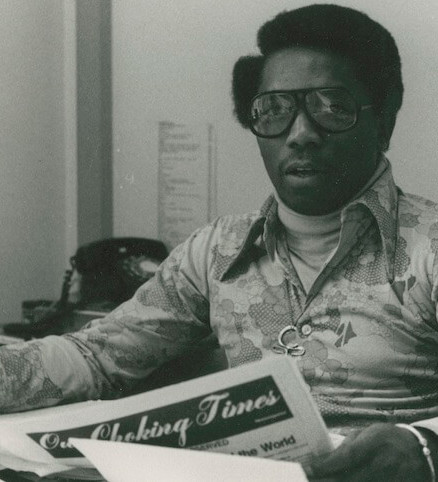 Student in the 1970’s reading a copy of Our Choking Times.

Despite these limitations, the publication grew in staff and popularity. By 1977, it had a staff of 42 and a circulation of 10,000 under faculty advisor Chuck Williams. Though the name changed to Spectrum and then Dimensions in 1982, the paper enjoyed a two-decade run that helped launch the careers of black student journalists such as Trevor Coleman ’86, who got his start as a columnist penning “Coleman’s Corner.” From ruminations on the death penalty to interracial dating’s impact on black identity, Coleman’s thoughtful columns led to a career in journalism and executive communications.

“Writing for Our Choking Times and Dimensions was probably the most important experience I had as an aspiring journalist. I had the opportunity to express myself and write about my own reality on my terms—not having someone else write about me from their perspective,” says Coleman, who was also among The Lantern’s first black columnists. “I was able to leverage that experience into an internship with the New York Times and freelance writing for African American publications, so by the time I was ready to graduate, I had a couple offers.”

Among many other accolades, Coleman received a Pulitzer Prize nomination in 1992 for the series “Who Speaks for Black America?” and awards from the National Association of Black Journalism, the Society of Professional Journalism and Best of Gannett. He is currently chief speechwriter and senior advisor to the chancellor of the State University of New York, the largest comprehensive system of higher education in the United States.