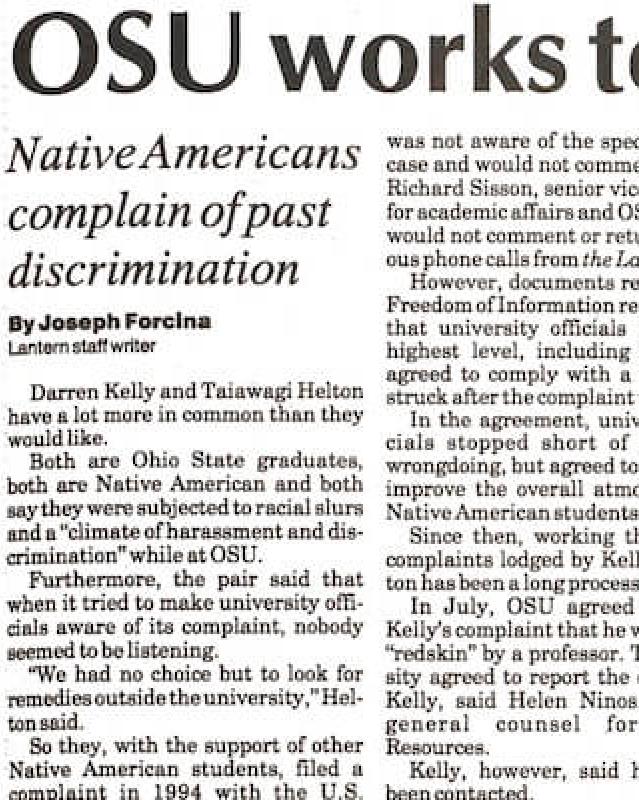 Ohio’s historical roots can be traced back to Native American tribes. Despite these strong ties, the tribes’ culture and contributions have not consistently been recognized. That was also the case at Ohio State until 1994, when two Native American students fought for change and recognition. That year, Taiawagi Helton and Darren Kelly filed a complaint against the university with the U.S. Department of Education’s Office of Civil Rights.

Helton and Kelly had previously lodged complaints about discrimination and harassment with Ohio State, but when “nobody seemed to be listening,” they went a step further. “We had no choice but to look for remedies outside the university,” Helton recalled in a Lantern article published in 1995. Ohio State eventually reached a settlement. Among other things, administrators promised to provide Native American student organizations with the resources needed to pursue their goals. They agreed to offer services through the Office of Student Life and to bolster efforts to recruit Native American faculty and staff.

"We had no choice but to look for remedies outside the university."

American Indian Student Services was established in 1996. “That was a significant move,” says Marti Chaatsmith, the first director of the office and now associate director of the Earthworks Center at The Ohio State University Newark campus. Chaatsmith came to Ohio State in 1984 to complete her doctorate in sociology. Although she had been recruited as a Native American student, she found no meaningful support network in place at the university.

Ethnic Student Services, the forerunner of today’s Student Life Multicultural Center, did not list Native Americans among the groups it represented. No one even knew how many Native American students were on campus. “It was shocking to me,” says Chaatsmith, who tackled the job of advocating for students in addition to working on her degree. The American Indian Council, which Chaatsmith co-founded, provided support. Still, students often felt lonely and isolated—“invisible,” some said. There were too few of them to draw attention, but the very lack of numbers made them feel ostracized and reluctant to put themselves forward. 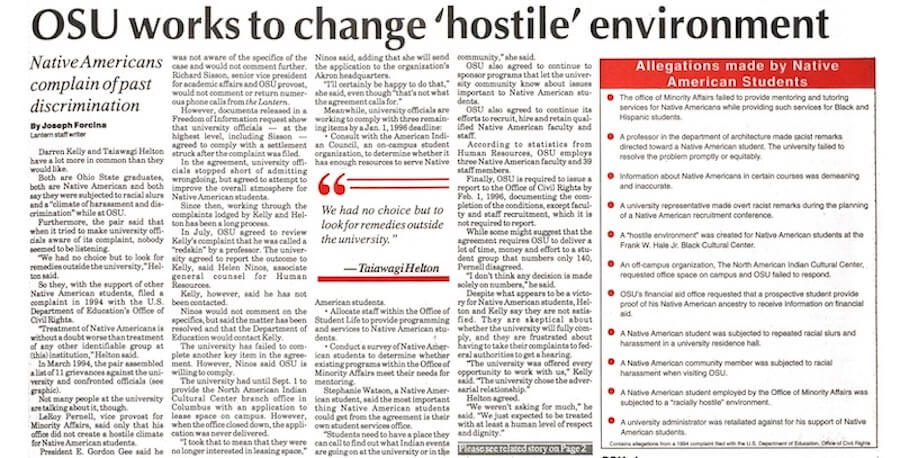 Chaatsmith helped develop and teach courses in Native American studies, and she organized events celebrating Native American heritage. Her work and that of colleagues and students brought results. The American Indian Council lobbied the state legislature to offer out-of-state fee waivers to students from tribes that had been forcibly removed from Ohio in the 1800s. Scholarships became available for Native Americans, and the university created a minor in American Indian studies.

Beginning in 2010, Chaatsmith initiated outreach programs through the Newark Earthworks Center, which studies American Indian issues and the ancient cultures of the Ohio River Valley and elsewhere. Indigenous peoples whose tribes had left Ohio have started to return, which Chaatsmith sees as an encouraging sign for the university. “The American Indian students who might consider coming to Ohio State and those we have on campus now are highly qualified,” she says.

Today’s students find a helping hand in the Native American/Indigenous programs and resources offered by the Multicultural Center. Intercultural Specialist Melissa Beard Jacob describes the center as “a space for them to talk about concerns they have or challenges they are facing as they transition into collegiate life.”

Along with hosting events throughout the year, Jacob’s office makes leadership opportunities available through groups such as the Ohio State branch of the American Indian Science and Engineering Society, a prestigious national organization.

Jacobs says most of the students she has worked with recently are majoring in fields such as engineering, biology and pre-med. And graduates have gone on to jobs in teaching as well as the automotive and aerospace industries, she says. “There are a lot of success stories.”