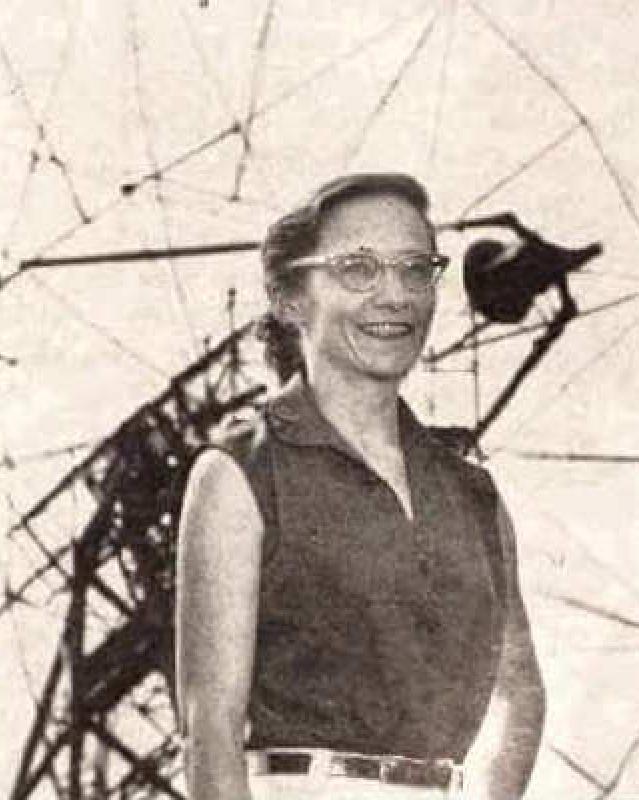 A Music Teacher's path to Listening to the Skies

Joy Eaton, PhD ’57, was a mathematics enthusiast first; the trailblazing and groundbreaking came later. From teaching music to wartime work with radar to writing a dissertation on a new form of astronomy, she followed her affinity for math into male-dominated spaces to explore new ways of hearing celestial sounds.

Born in Comanche, Texas, Eaton had taken math classes for all of her electives at North Texas State Teachers College, where she earned her BA in music in 1943. The following year she’d returned to school to pursue her master’s in math when the U.S. military, facing a shortage of male labor as a result of the war, issued a call for engineering technicians. Eaton answered it, joining thousands of American women who went to work during World War II in jobs previously off limits to them because of their gender. After completing an intensive, six-week training at the University of Texas, she moved to Ohio to work as a radar technician at what is now Wright-Patterson Air Force Base.

After the war ended, Eaton became a math instructor at Ohio State in 1946 and continued her graduate studies. In 1948, after she was initiated by the national mathematics honorary society Pi Mu Epsilon, she moved to the Department of Electrical Engineering to teach third-year students about calculations in alternating current circuit theory and transmission. The Lantern wrote a short article about Eaton and the rest of the new Pi Mu Epsilon initiates. Her teaching in electrical engineering, however, prompted a series of stories in university publications.

“A woman has invaded the teaching ranks in the electrical engineering department for the first time in the history of the University,” the Page 6 story began. “She’s blonde Joy J. Eaton, 25, a former Texas music teacher, who switched to engineering during the war to take a job as a Wright Field technician.” Three days later, the paper featured photos of Eaton and the caption, “Engineering students in Robinson Laboratory were not too sure they were in the right class when they saw a woman instructor in the room. But they soon found out it was Miss Joy Eaton, a former Texas music teacher, who is teaching in the electrical engineering department.” 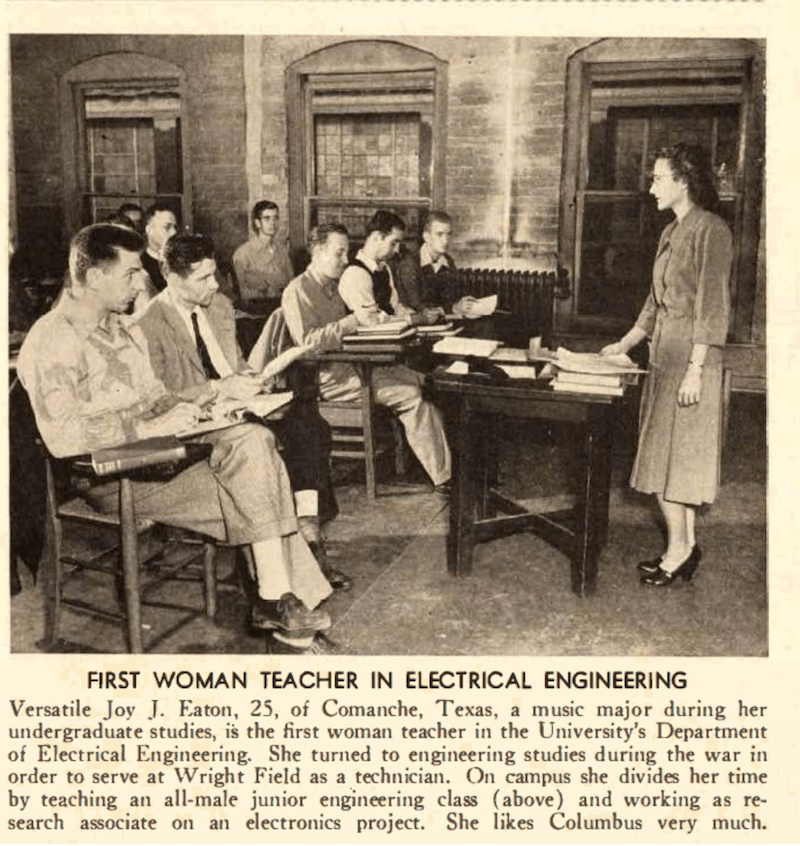 From the Jan 15, 1949 issue of The Ohio State University Monthly.

Those stories about Eaton and others that followed read like society page profiles, noting her appearance, her interests in horses and flowers, and her thoughts about where she lives. (“She likes Columbus very much,” reported one; “except the soot,” said another.) A May 1949 Lantern story by writer Marilyn Hennon, with the headline “Ex-Texas School Marm Switches to Engineering,” even noted for the “fellows” that Eaton was not married.

Campus media also portrayed music as an unlikely background for someone in engineering, but Eaton pointed out in Hennon’s story that her interests were clearly well suited for the field. “Sound waves and acoustics make a practical use of music in manufacturing radios and phonographs,” she said. “I like straight-forward thinking rather than dealing in generalities, and the field of mathematics and engineering concerns definite facts.” Eaton was truly groundbreaking in the research she conducted for her dissertation. Her topic: the newly emerging field of radio astronomy, which studies radio waves emitted by extraterrestrial bodies. Such waves, which are much shorter than optical signals and therefore require larger instruments to discern, were first noted in the ’30s, and radar technologies developed during the war were applied to exploring them.

In 1957, Eaton became the first woman to receive a PhD in electrical engineering at Ohio State. According to Ohio State Monthly, Eaton was the first woman in the world to study radio astronomy for her dissertation, which was entitled An investigation of extraterrestrial radio radiation in the cygnus region at 915 megacycles per second. After receiving her PhD, Eaton was promoted to assistant professor.

In addition to her pioneering research, Eaton provided guidance to student organizations such the Gamma chapter of Eta Kappa Nu, an honorary fraternity for electrical engineering undergrads for which she was treasurer. The same year she received her PhD, she was also advisor for the new Coed Engineers Club, which one of its founders, second-year student Lynne Witmer, described as intended to help the College of Engineering’s 16 women students “lose their ‘alone’ feeling.”

Today, women make up nearly 24 percent of students in the College of Engineering and 25 percent of its tenure-track faculty, and the college has a 12-person office dedicated to Diversity, Outreach and Inclusion initiatives that include mentoring and industry networking opportunities for underrepresented minority students. It offers a Women in Engineering residential Learning Community for college women who, like Dr. Eaton, are on their own paths of discovery.