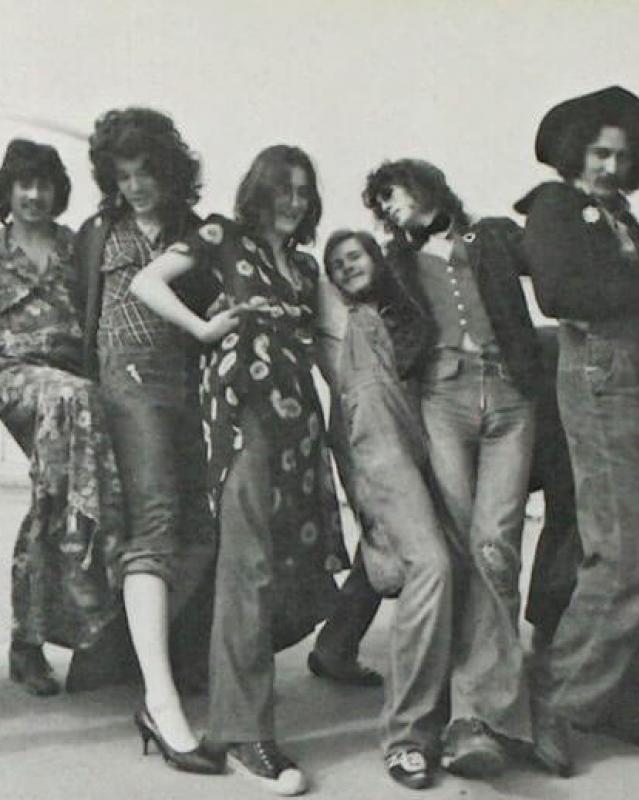 The Ohio State University today has a national reputation for welcoming gay, lesbian, bisexual and transgender students, faculty and staff, with high rankings from College Choice and the Campus Pride Index for its institutional commitment to LGBTQ-inclusive policy, programs and practice.

Creating such a community that supports basic human rights for LGBTQ people has been a hard-fought battle for activists, spanning decades.

In March 1971, the Ohio State chapter of the Gay Liberation Front (GLF) was established to “educate the university in an attempt to eliminate the repressive attitude present toward homosexuality,” Tom Lewis, executive director of Society for Individual Rights of Ohio, a civil liberties organization, told The Lantern. It had 25 active, plus 200 non-active members, who met weekly at St. Stephens; hosted rap sessions; and sponsored events like Gay Teach-ins, movies and dances.

In October 1971, the Gay Activists Alliance (GAA) formed because, as former GLF coordinator Jeff Arnold told The Lantern, “many homosexuals felt alienated from GLF because it was involved in anti-war and civil rights movements that were not gay-related.” GAA focused on supporting the gay community through weekly meetings for regular fellowship; counseling and legal services; and social events such as film showings. Its activism included staging protests when Columbus police arrested three male attendees at a GAA dance for wearing women’s clothing, and publicly demanding the Ohio Democratic Party include gay representatives in its 1972 slate of delegates.

Over the years, the group, which eventually became known as the OSU Gay Alliance (GA), instituted major events such as Gay Pride Weekend, and a Gay Student Orientation Program in 1980 geared toward students’ concerns that weren’t covered during summer freshman orientation. It lobbied to change university rules to protect gay students from discrimination in housing and in group membership such as fraternities and the Ohio State Bible Studies student organization, which demanded gay students change their sexual orientation. And the group created a speakers bureau to educate OSU and community groups about gay issues.

During this same time, several lesbian groups formed after their members felt themselves being marginalized both in feminist groups, where straight members didn’t want to be associated with gay people, and in gay organizations, which their voices and concerns were often drowned out by men’s.

Shortly after GAA formed, a group of women members decided to form their own organization, called Radical Lesbians. GAA coordinator Susan Vasbinder told The Lantern that Radical Lesbians were different from many older lesbians in that they didn’t necessarily identify as “butch” or “femme” per se. “The new lesbian is the equality lesbian,” she said. The Radical Lesbians hosted group discussions—or consciousness-raising sessions—where participants found support through sharing experiences. They also teamed with groups such as Columbus-OSU Women’s Liberation and the National Organization of Women to sponsor events such as Women’s Week, teach-ins and talks by nationally known feminists.

Another group, OSU Gay Women’s Support (GWS), emerged out of Columbus-OSU Women’s Liberation “to end the isolation of gay women on campus” and “make OSU aware of lesbians’ needs,” president Lisa Ransdell told The Lantern. It sponsored coming out workshops with a group from the Women’s Action Collective called Lesbian Peer Support. “What happens in the workshops is that we get women who go through many changes and become integrated into the community,” Ransdell said. “In the course of eight weeks, we see a lot of consciousness raised.”

In 1985, a chapter of the Gay and Lesbian Alliance (GALA) formed at Ohio State to continue to fight for civil rights. The group improved student life by hosting social events; publishing a weekly newsletter; operating a hotline; creating a fund to help facilitate research on LGBTQ topics; providing peer counseling; and much more. In 1989, it hosted the first campus celebration of National Coming Out Day. As they chalked sidewalks with messages such “Gay is okay,” members were confronted and harassed by angry homophobic students who followed them around shouting that “homosexuals are the cause of AIDS, they should all die and they had no right to promote the alliance on campus sidewalks,” GALA treasurer Chris Carlisle recounted to The Lantern.

GALA President Tom Fletcher and his roommate (and presidential successor), Michael Scarce, fought for months against harassment and death threats from their floormates.

GALA members held high-visibility protests against Wendy’s and Walden Books for caving to demands of the anti-gay American Family Association in 1990. The following year, the chapter joined 50 other universities to fight discrimination from the Department of Defense, and led demonstrations on the Oval to protest discrimination by the Reserve Officer’s Training Corps’ against gay men, lesbians and bisexuals. Its members’ work did not go unnoticed; in May 1991 GALA was recognized as a campus leader by the university, which presented the group and its president, Michael Scarce, Distinguished Affirmative Action Awards.

On the staff front, the Association for Gay, Lesbian and Bisexual Faculty and Staff formed in November 1990, with approximately 50 people attending the first meeting, including representatives from Ohio State’s regional campuses. One of the group’s top priorities was securing domestic partner benefits, “which we see as an issue of equity in employment,” History Professor Leila Rupp told The Lantern. As a result of the association’s advocacy, the university’s Board of Trustees approved a spousal equivalency policy by February 1992 that offered sick leave and bereavement leave benefits to domestic partners of Ohio State employees. 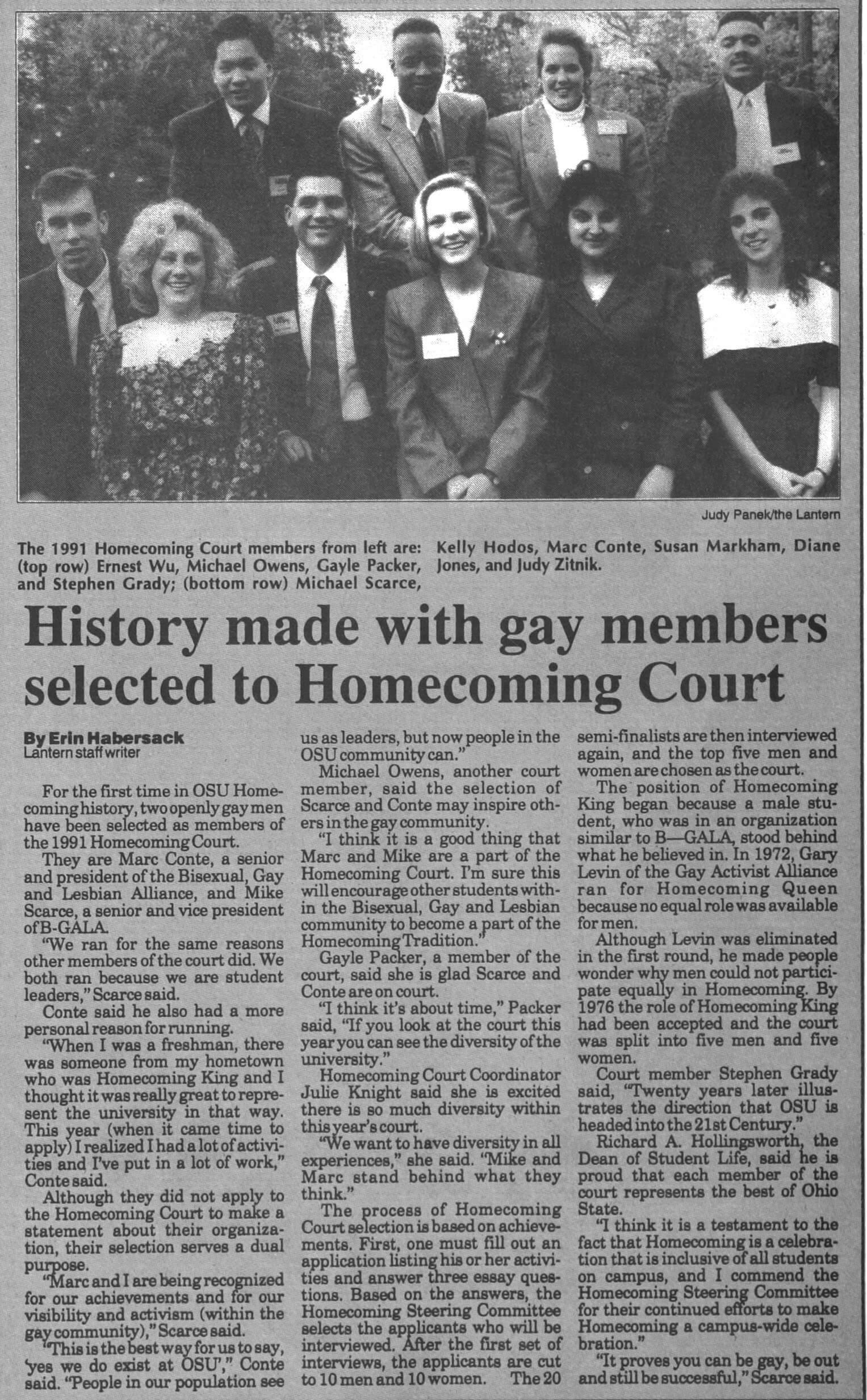 “It’s a good first step,” steering committee member Brad Myers told The Lantern. Still, there was still a long way to go toward the goal of full benefits for domestic partners, including health insurance and tuition waivers. In 2000, the association took out advertisements in university publications that read, “We, the undersigned, believe that extending full benefits to domestic partners of faculty, staff and students is the right thing to do.” At last, the association’s goals came to fruition in fall 2004 and early 2005, when the university began offering LGBTQ faculty and staff benefits for their children and same-sex partners.

Other contributions of the association included LGBTQ representation in the Diversity Lecture Series, the Interdisciplinary Undergraduate Minor in Sexuality Studies, and LGBTQ Diversity Training. Members of the group also created the Gay, Lesbian, and Bisexual Mentoring Program, which welcomed new members of the Ohio State community with a support network and role models.

In recent years, a new generation of activists has worked to create an extensive network of support and services for LGBTQ members of the university community, including gender-inclusive housing and restrooms on campus, mental health care, wellness programs and transgender care insurance coverage. A faculty-staff taskforce was also created to advise the Office of the Provost on creating a university-wide LGBTQ+ Association.

“Ohio State has been really accommodating,” says task force member and College of Arts and Sciences Assistant Professor Matthew Birkhold. “The LGBTQ community has a big presence on campus, and once we’re organized, we’ll have a permanent home from which we can do even more.”