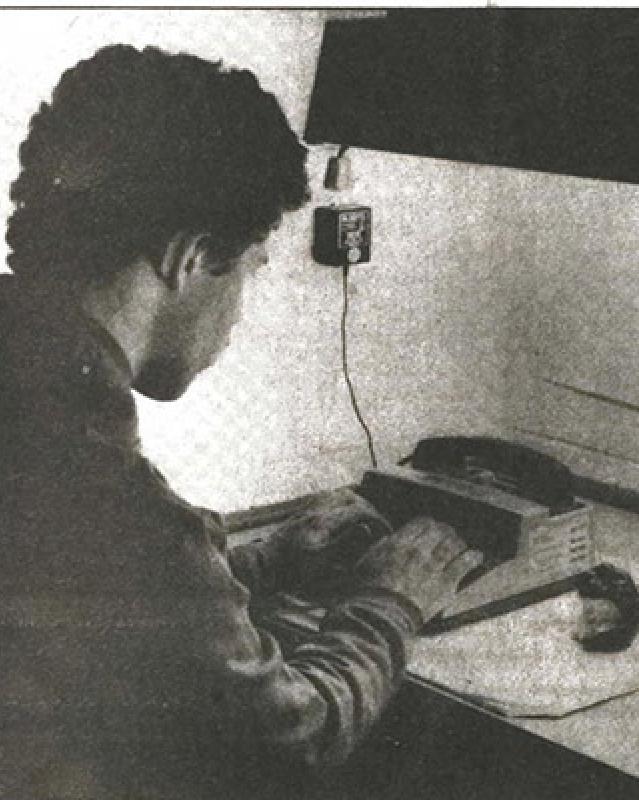 John Freeman became the first Deaf person to attend Ohio State. He navigated through his class and social life with little assistance from the university.

Most students heading away from home for the first time as college freshman do so with a fair amount of trepidation, anxiety and social awkwardness. For John Freeman, the first Deaf student to attend Ohio State full-time and live on campus in 1986, those challenges were even mightier. Freeman navigated college life on his own with little assistance, and faced near-impossible difficulties as the university struggled to make his education fully accessible.

Freeman, who grew up in Westerville, Ohio, lost his hearing at the age of four due to bacterial meningitis. His deafness never slowed him down however, and he was always considered an overachiever. He exceled while attending The Model Secondary School for the Deaf in Washington, DC, and graduated with honors. He was then accepted into Ohio State’s electrical engineering program.

Almost immediately, Freeman encountered challenges with interpreters. The Ohio Rehabilitation Services Commission (RSC), which was required by federal law to provide interpreters for Deaf students, entered into a fee dispute with a contracted interpreter, who was being paid just 45 cents per hour for services (roughly $1.07/hour today). After a difficult fall quarter due to inconsistency and even no-shows by interpreters, RSC began providing its own interpreters to Freeman.

As the only Deaf student on a campus of 53,000, Freeman often found it “difficult communicating with people.” He said, “If only more people could sign.”

The university was also slow to make Freeman’s dorm room fully accessible. He told The Lantern in January 1987, “I’ve been waiting since summer quarter for a doorbell” that would flash a light to notify him of a classmate or friend at the door. Freeman eventually received his doorbell, but was still using a temporary portable flashing system in place of an accessible fire alarm system in his dorm room in his third quarter living on campus.

Freeman was described in a 1987 Lantern article as having an easygoing manner and a ready smile, which helped greatly with socializing among peers. Still, as the only Deaf student on a campus of 53,000, Freeman often found it “difficult communicating with people.” He said, “If only more people could sign.”

Freeman said he did not fully realize all the problems he would encounter at Ohio State, and although he never felt discriminated against, he often felt isolated. By the end of his first academic year, he made the difficult decision to transfer to the National Technical Institute for the Deaf, a branch of Rochester Institute of Technology in Rochester, New York.

Freeman left a legacy of sorts and became a pioneer for Deaf students at Ohio State. Today, Ohio State’s Student Life Disability Services (SLDS) provides many services for Deaf students and others with disabilities who need assistance accessing the benefits of an Ohio State education. Alyssa Menzo, a senior majoring in anthropological sciences and history who is hard of hearing, says “SLDS ensures that I don’t miss any material based on my hearing.” She has the option of having another student act as a notetaker for her, or having a transcriber who attends classes with her and provides a live feed that shows up on her iPad or other screen.

John Freeman, photographed for The Lantern in 1986, used assistive technology to make calls from his dorm room.

For students who are Deaf—like C Palmer, a first-year master’s student in the College of Social Work—the university provides interpreters. “Disability Services has done a good job of helping me and supporting me,” says Palmer. “They have always made interpreters available to me, even for things that aren’t class related, like events I want to attend.” Still, challenges sometimes arise. “I think it’s a little tougher with individual professors sometimes. They aren’t always aware of how to turn on captioning for videos, or how to work with an interpreter.”

That’s where SLDS comes in, says Menzo, offering help that no doubt would have benefitted John Freeman 35 years ago. “Each person is assigned an advocate who will talk to our professors for us.”

If Freeman had access to today’s SLDS as a student, his story may have turned out differently. Richard Maxwell, then assistant director for disability services at Ohio State, told The Lantern in 1987, “We knew John was going to run into problems. The first individual in any program is going to have problems. We compounded those by having delays in getting equipment for John’s dorm room, and a few other odds and ends.” He added, “I think that what we had at that point in time, we did everything we could possibly do to make life easier for John.”