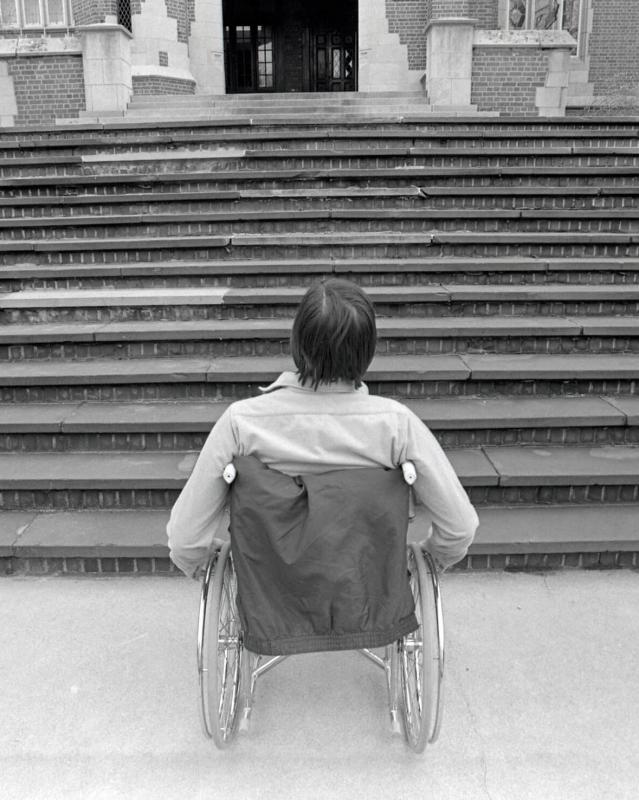 While The Ohio State University was founded for Ohioans to find opportunities through education, for its first 100 years the university’s campus presented barriers for those with physical disabilities.

But Jean was undaunted, and her brother, a fellow Buckeye, carried her and her chair up flights of stairs to classes.

When Jean Williams enrolled in 1962, her friends tried to discourage her from becoming a Buckeye, since fewer than half the buildings on campus could accommodate her wheelchair. But Jean was undaunted, and her brother, a fellow Buckeye, carried her and her chair up flights of stairs to classes.

When Julie Cochran applied later in the ’60s, she was told campus wasn’t equipped for her wheelchair and she should consider going elsewhere. Like Jean, however, Julie was determined to become a Buckeye, so she started classes at Ohio State Mansfield and then transferred to the university’s Columbus campus.

In Columbus, members of the Delta Chi fraternity carried Julie up stairs to her classes, and as the issue of accessibility became a national topic, more and more Ohio State students began recognizing the physical barriers students with disabilities faced.

For its class gift, the senior class of 1972 decided to help eliminate those barriers. They hosted campus events at which Julie Cochran spoke about the need, and the $75,000 the seniors raised helped the university qualify for federal funding for the effort.

Their work helped create transportation services and modify buildings and street curbs. A library for visually impaired users was created, as well as housing that accommodates disabilities. And what is now called the Office of Disability Services was established.

The improvements were life-changing, and in 1973 the university was recognized for the changes by Courage, Inc., a Columbus advocacy group whose awards committee was chaired by none other than Jean Williams.

Today, Ohio State’s Office of Disability Services serves more than 2,000 students, and features like ramps and elevators are common throughout the university.

And Jean Williams and Julie Cochran overcame the many obstacles early on to become lifelong Buckeyes. In addition to being alumnae, they both enjoyed successful professional careers, at Ohio State.