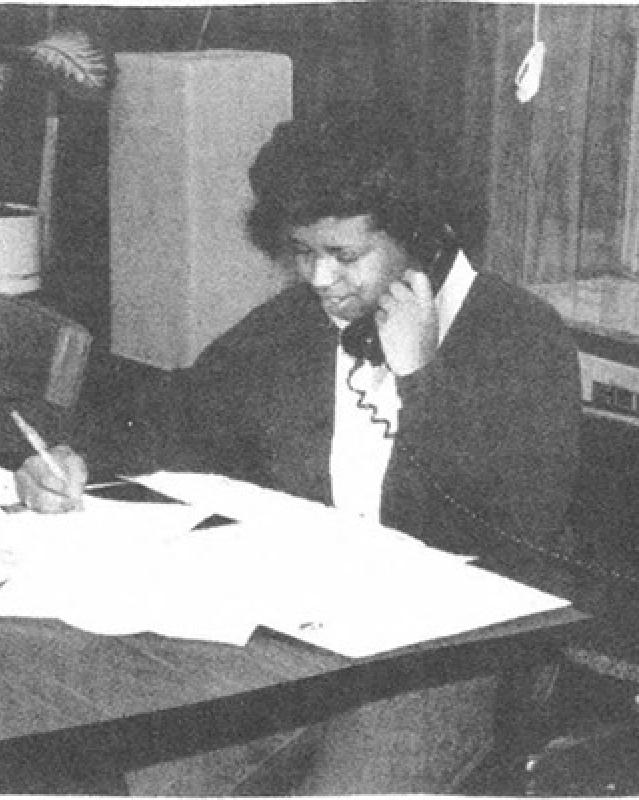 Stephanie Peters achieves her life's goals and more all while breaking barriers.

"One word to describe Stephanie is dynamic,” Undergraduate Student Government (USG) President Todd Shaver told The Lantern in 1984. Stephanie Peters, then a sophomore, served as assistant cabinet coordinator and internal affairs director for USG. Peters later made Buckeye history as the first Black woman to serve as senior class president, giving her the honor of presenting the senior class gift to Ohio State President Edward H. Jennings—a scholarship in the amount of $50,000.

“Dynamic” is a fitting descriptor for Peters. In the same 1984 Lantern article, the sophomore shared her hopes to one day attend law school at Georgetown University in Washington D.C.—which she did after graduating from Ohio State in 1986. She entered Ohio State with a political science and pre-law major, and ended up adding women’s studies as a double major.

Stephanie Peters working in the USG office in 1984

She credits her father with being the intellectual and academic influence in her life, while her mother was the social networker. Peters chose to enroll at Ohio State because her father told her, “‘You’re from Akron, a small town. You need to go meet other people from other places in Ohio and the world’,” recalls Peters. Ohio State offered that, and she notes, her parents put three children through the university.

Her parents also encouraged her to be passionate about something, and to develop relationships that are important and impactful. “Mom said, ‘A’s are fine, but B’s are fine too if you also have good friends, give back to the community and know how to network’,” Peters remembers. “It’s critically important to develop authentic friendships, because friendship is about support when life is hard; not when it’s easy.”

She received several awards and honors during her tenure at Ohio State, including being named one of 10 outstanding seniors during the President’s Undergraduate Leadership Awards Ceremony; was named as a 1985 Outstanding Black Student Leader; and was elected to the 1985 Homecoming Court.

After her first year of law school, she had the opportunity to study abroad at Oxford University through the Ohio State Moritz College of Law comparative law study abroad program. Peters received her Juris Doctorate from Georgetown University; and still interested in political science, earned a Master of Arts in Political Management from George Washington University.

Peters’ Ohio State network continued to grow after her graduation. Her connections, including with fellow students, professors, and advisors, have played important roles throughout her career, which includes serving as attorney-advisor for the Office of the General Counsel at the U.S. Office of Personal Management and Democratic Counsel for the U.S. House of Representatives Committee on the Judiciary and as a partner at the law firm, Patton Boggs LLC. Currently, she is Microsoft’s Senior Director of Congressional Affairs, still based in Washington, D.C.

“Ohio State not only believed in me but also instilled in me the value of ‘paying it forward’,” says Peters. Her work continues to reflect the “dynamic” spirit that was nurtured and refined at Ohio State.