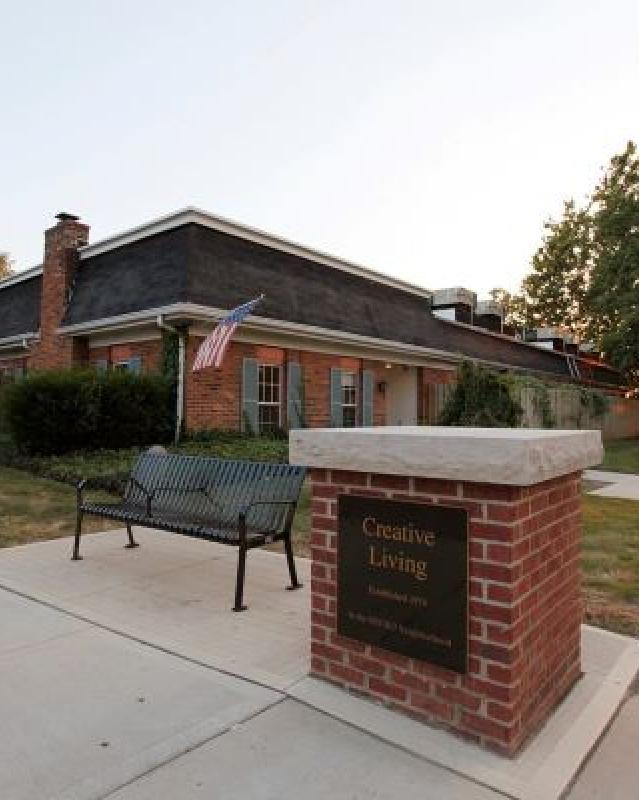 “Today, it continues to be the linchpin for our residents to live independently and affordably while pursuing their life goals.”

While Maxwell never expected to become independent again, he recognized that the alternative was not total dependence. Instead, Creative Living, which he helped found, eases the way for residents to participate fully in life. The program includes two handicapped-accessible apartment communities, one on land leased from Ohio State and the other on nearby property donated by Battelle, the research institution adjacent to the university.

“When Creative Living was founded, the concept was groundbreaking,” says executive director Bob Overs. “Today, it continues to be the linchpin for our residents to live independently and affordably while pursuing their life goals.”

As recently as the mid-nineteenth-century, persons paralyzed by accidents or diseases faced much-shortened lifespans. Even after advances in rehabilitation led to longer lives, quality of life often was lacking. If they didn’t have the means to support themselves at home, the alternative for many people was a nursing home or other institution with limited opportunities for employment, activities and interactions with the outside world. For young people especially, the emotional and financial toll could be devastating.

After his accident, Maxwell spent several years in Ohio State’s Dodd Hall rehabilitation facility. He earned a bachelor’s degree in business administration in 1969 and began a career in the university’s Disability Services Office.

“All I want is an even break,” he told the Columbus Citizen-Journal in 1972. He talked about the satisfaction of receiving his first paycheck for his first job after the accident: “There was really something great about being a taxpayer again.”

Maxwell’s point was that handicapped individuals’ physical limitations shouldn’t be allowed to hinder their ability and desire to contribute to society.

In the late 1960s, frustrated by the lack of campus-area housing for handicapped students, Maxwell and others had started advocating for a residence that would provide not only adapted physical accommodations but the intangible benefits that would go along with them.

The group formed a nonprofit corporation to secure support and to educate builders and the public about how to create accessible living spaces. Stairs must be eliminated and doorways widened to accommodate wheelchairs. Electrical outlets and light switches, kitchen and bathroom facilities, and closet shelves and clothing rods must be lowered. Heating and cooling systems must be adapted.

Developed through a contract with the U.S. Department of Housing and Urban Development, the first Creative Living community opened in October 1974 at Eighth and Perry Streets, on the south edge of campus near Ohio State’s medical complex. With 18 apartments, it was the first of its kind in the country.

A second facility with 16 units opened at 10th and Highland Avenues in 1986.

While many residents are students, others, including older adults, also are welcome. The housing is intended to be transitional, with residents staying for several years while they complete their degrees or establish financial stability. All pay rent, and all are required to hire personal-care attendants as necessary.

In addition, nonmedical assistants—including occupational therapy students from Ohio State—are on call around the clock to help with tasks when personal attendants aren’t available. Rounding out the community are staff members, trustees and volunteers who organize activities and fundraisers.

The result is a supportive atmosphere where residents can socialize as they’d like and also enjoy the privacy to study or take care of day-to-day business.

“I’ve learned a lot about maneuvering around Columbus, as well as basic living skills, from the people around me who have similar injuries or are dealing with similar problems.”

Resident Justin Lennon resumed his studies in psychology at Ohio State in early 2020 after sustaining a spinal cord injury several years earlier. “My journey back to college was difficult because of my situation,” he says. “Creative Living has been a huge help because they have given me my independence to take classes.”

Lennon, who’s from Cincinnati, says the community provides valuable experiences in other ways, too. “I’ve learned a lot about maneuvering around Columbus, as well as basic living skills, from the people around me who have similar injuries or are dealing with similar problems.”

He especially appreciates the on-call assistants. “They’ve been trained very well, and since they’re there 24 hours I know I can count on them to help me whenever my aide isn’t around,” he says.

“Overall, I could not be in the position I am today without Creative Living.”

Bob Overs says that the development of the first Creative Living community in the late 1960s and early ’70s came at a turning point in society. “The country was beginning to recognize the need to break down the barriers of discrimination and accommodate handicapped persons,” he says. “Still, it was nearly a quarter-century before legislation addressing housing and civil rights comprehensively protected Americans with disabilities.”

Dick Maxwell helped advance that agenda at Ohio State through his work in the Disability Services Office. When he passed away in 2011, the Creative Living newsletter honored his memory, describing his faith in people, his sense of humor and his life’s work: “He was most proud of being able to give tools and knowledge to students with disabilities so they could become their own self-advocate.”

“There are a lot of can’ts in Dick Maxwell’s life,” a Lantern reporter wrote about the former Ohio State student in January 1972.

Maxwell himself never denied that. After being paralyzed as a sophomore during an intramural football game in 1963, he spoke often and eloquently about the many limitations of life as a quadriplegic.