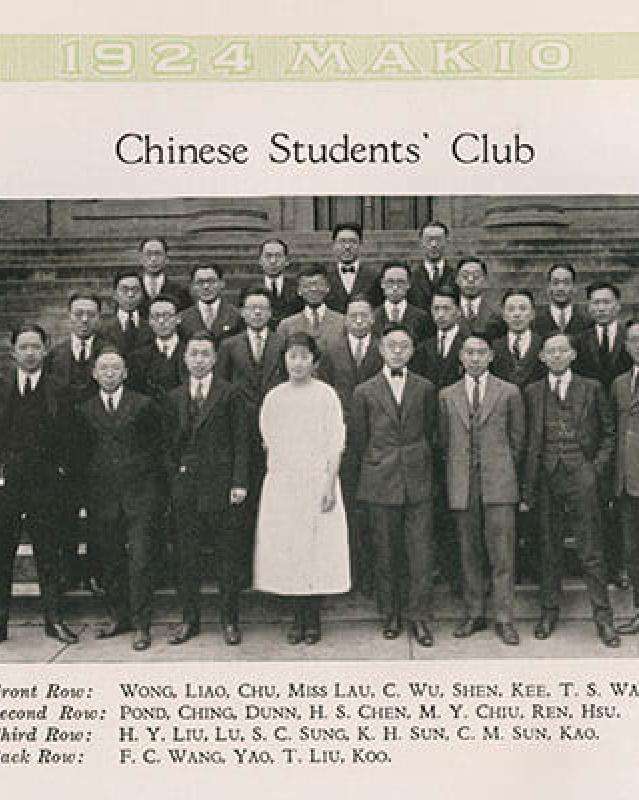 In 1906, Daqueen Tao became Ohio State’s first student from China. He arrived as part of a nationwide influx of students who came to study in the U.S. at the end of the Qing Dynasty. Four years later Tao added another first, when he became the first Chinese student to obtain a BA from Ohio State in June 1910.

While details about Tao’s experience are scarce, records show he was an early leader of the Ohio State chapter of the Cosmopolitan Club, a national organization with a mission of developing friendly relations between foreign and U.S. students. He was elected assistant treasurer and served on the board of directors of Ohio State’s chapter in 1907, and represented Ohio State to ratify the Cosmopolitan Club’s national constitution with seven other universities. Besides Tao, there were 103 Chinese students who attended Ohio State between 1906 and 1928. They included Morgan Gen Louis, the first Chinese student to receive an Ohio State PhD in 1919 (in economics), and Frank Benjamin Dun, the first Chinese student to receive a master’s degree—an MS in electrical engineering in 1915.

As the university’s first Chinese students spent their college days more than 7,000 miles from home, the Chinese Students’ Club formed to host events and activities of interest, and to help advocate for them in mainland China. The first mention of the club in the 1913 Makio yearbook lists electrical engineering major Ting Chin Chang as president, and a photo in the 1918 Makio shows 13 members including one woman, B.Y. Kau.

"The U.S. has always been a popular destination for 'top Chinese students'..."

In 1920, Catherin Lau was president of the Chinese Students’ Club when it hosted a national meeting of the Chinese Students’ Alliance, with 110 students representing Ohio State, University of Michigan, University of Illinois, Oberlin College, Johns Hopkins University, Yale and others. One of 31 Chinese students attending Ohio State in 1923, Lau described in an interview with The Lantern how she based her major on her country’s needs. “For my country’s sake, I feel that I should repress and sacrifice my personal desires for a musical career and continue with sociology as my major,” she said. “China needs sociologists, particularly woman social workers, and I feel that I should not be selfish in regard to my personal wants.”

Chinese study abroad waned during the World Wars, but the number of students began to surge again in the late 1970s, as diplomatic relations were restored between the two nations. Today, more than 4,500 Chinese students are enrolled at Ohio State. Back home, more than 2,000 alumni and friends live in Taiwan, and another 1,000 live in mainland China, where alumni clubs in Shanghai and Beijing provide opportunities to connect with fellow Buckeyes.

In 2010, Ohio State expanded its relationship with China with the opening of its Global Gateway in Shanghai, the country’s largest city, with over 24 million people. A $100,000 grant from the U.S. Department of State helped fund the venture, which serves as a “mini embassy” for Ohio State and allows for stronger engagement with China, creating unprecedented opportunities for the students, researchers, alumni and partners.

The Gateway has helped usher in an influx of Chinese students at Ohio State—with 3,488 more Chinese students enrolled in 2019 than 2009. Over that past decade, the Shanghai Global Gateway has facilitated numerous Ohio State delegations to the country, instituted International Corporate Partnership Programs to connect companies with Ohio State’s educational resources, and much more. One can only imagine how, back in 1906, Daqueen Tao might have enjoyed the pre-departure orientations now offered in mainland China by the Office of Undergraduate Admissions and First Year Experience program, as he embarked on his journey to become the first of many Buckeyes from China.