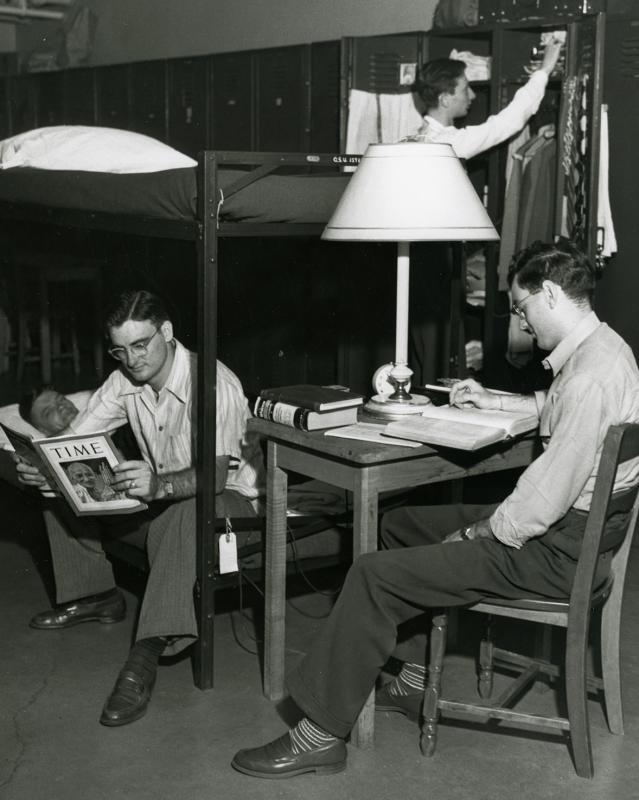 Lloyd Fisher, Jr., BA ’48, JD ’49, was a giant in Ohio’s legal community until his passing in 2016 at the age of 92. He retired in 2013 after a 63-year legal career that included serving as a trust officer with Huntington National Bank before joining private practice and becoming a partner with Columbus’ Alexander, Ebinger, Fisher & Lawrence, which merged with Porter Wright Morris & Arthur in 1986.

Throughout his life, however, the Medina, Ohio, native never forgot his humble roots—including living in Ohio Stadium as a college student shortly after the Great Depression. “When you tell people that you lived in Ohio Stadium, you get this look and they think somehow or other maybe you were connected with the football program or something,” Fisher told an Ohio State archivist during a 2009 interview. “It isn’t common knowledge that there were just some dormitories that were built in the stadium.”

The stadium dormitories were the brainchild of Ohio State Dean of Men Joseph Park, who wanted to provide affordable housing for Ohio students who could not otherwise afford college. Built through Works Progress Administration, a New Deal agency that employed millions of people to carry out public works projects, the dormitories housed young men who worked five to seven hours a week in exchange for discounted housing.

Fisher counted himself lucky to reside in the Tower Club, the first of the dormitories built in the stadium’s southwest tower, when he came to Ohio State in the fall of 1941. The accommodations were “bare, spartan,” he recalled, with sleeping rooms that slept about 20 men in double-decker cots, steel lockers, and a common shower room and toilet area. “It was great basic training for the Army basic training that came later on for almost all the residents in 1941,” noted Fisher, whose education was paused by three years of Army service.

In addition to maintaining good grades, residents were required to help keep the dormitories running. “There were only two paid employees in the club: the cook and the assistant cook. We did all the rest of the work,” said Fisher. “We washed the pots and pans … We served the food. We cleaned all of the rooms and all of the areas regularly, every Saturday.” That included game days, when the residents, who were under strict orders not to sneak into the games, could hear the crowd roaring above them.

The social hierarchy between the stadium dormitory residents and students with means did not go unnoticed. “There was a distinct feeling that we were the poor folks, that when you crossed High Street, there were fraternities and sororities, and we weren’t a part of that,” Fisher said. “If anything, I think it spurred most of us to be better students, to be better individuals.”

The stadium dorms circa 1947

He recalled paying approximately $350 for his Ohio State education that year—including room, board, tuition and fees—earned by mopping floors at the Ohio Union for 25 cents an hour. Later, Fisher became a cheerleader and was able to secure a better job exchanging wet towels for dry ones in the men’s gymnasium for 28.5 cents an hour.

Despite the challenges Fisher faced, looking back he realized he wouldn’t change a thing. “You almost instinctively began to understand that how a person was dressed, what he looked like, what his accent might be, didn’t really matter. That the character, the honesty, the integrity were the important parts of what kind of a person he was.” Through all of his years as a high-powered attorney, those lessons resonated and made him the person he was.