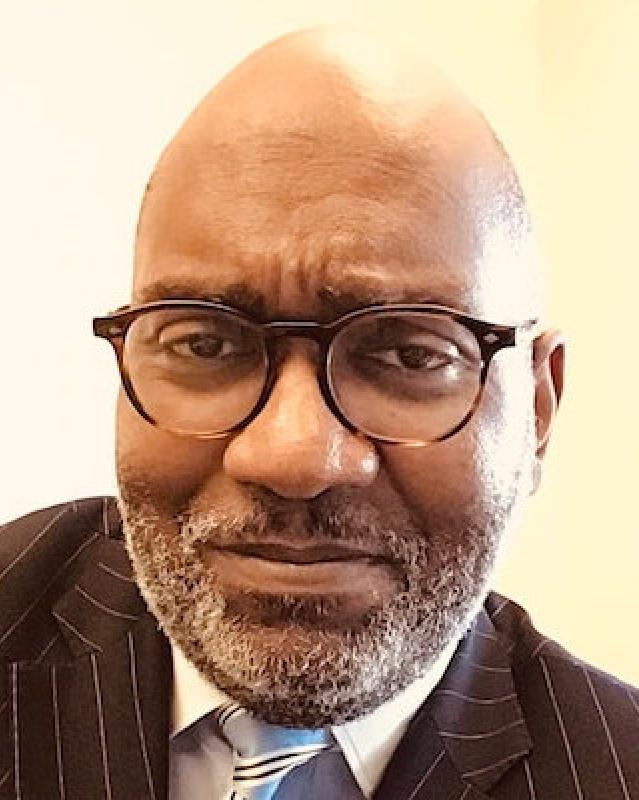 A Black Journalist finds his calling

Trevor W. Coleman '86 knows firsthand the power that stories hold - and the importance of understanding whose perspective controls the narrative.

During his first year in Columbus as an Ohio State student in 1979, Coleman followed along as white journalists in local media told the story of police killing a teenager named Keith Burke outside a popular campus disco. “This was a 16-year-old black boy, like five feet tall, shot in the back while running away from a police officer,” Coleman recalls. “I remember reading about it in the Columbus Dispatch, and the way it was written was absolutely racist.”

The experience not only inspired him to pen his first letter to the editor in The Lantern in March 1980, but it sent him on a lifelong trajectory of using his voice to advocate for social justice. “When you’re a minority and the majority characterizes you unfairly—creating a whole narrative about you that you don’t relate to and yet, your reality is defined by—that’s a very precarious situation for a young black man,” says Coleman. “And it’s one of the biggest things that motivated me to get into editorial writing.”

Long before he arrived in Columbus, Coleman had been a fan of black journalism and participated in the student newspaper and radio station at his Hudson, New York, high school. As one of nine children raised by a single mother who worked two jobs, however, he’d had no idea he could go on to college, or what the path to college even looked like.

After high school graduation, he’d applied for a state job in Albany and landed a prestigious position as a desk runner in the New York State Senate for then-Lieutenant Governor Mario Cuomo. There, he excelled alongside young people enrolled in advanced degree programs, and Cuomo and others encouraged him to go to college.

And so he did. After discovering Ohio State in a college guide, Coleman, having neither applied to Ohio State nor taken any standardized test, bought a one-way bus ticket to Columbus with all his worldly belongings stuffed into a broken suitcase, laundry basket and garbage bag. “When I got to campus and settled in, I found out where the admissions office was and was there at 7:45 before they opened,” he recalls. “When the secretary let me in, I said, ‘I’d like to apply to go to college here.’ That’s how everything started.”

"Ohio State changed the trajectory of my life."

At Ohio State, Coleman thrived, developing a reputation as a socially conscious columnist for Our Choking Times/Dimensions, the black-oriented student publication, and one of the first black columnists for The Lantern. Before college, “I had never even had a black teacher before, had barely seen a black professional, and certainly had no black male role models,” he recalls. “When I got to Ohio State I met all these black professors and administrators, and I really started to grow intellectually, culturally and socially. Being in that stimulating environment motivated me to explore not just black history but culture, politics, economics and social justice, and writing was a way of expressing that.”

And write he did—about President Reagan alienating the black community, the death penalty, affirmative action and much more. In addition, he pledged the Kappa Chapter of Alpha Phi Alpha Fraternity Incorporated and served as its president, served as minority liaison to Undergraduate Student Government, co-founded the Black and Jewish Dialogue Group, was a member of the homecoming committee, and won multiple awards for student leadership and student journalism, including the Rabbi Harry Kaplan Award from the Ohio State Hillel Foundation, among others. 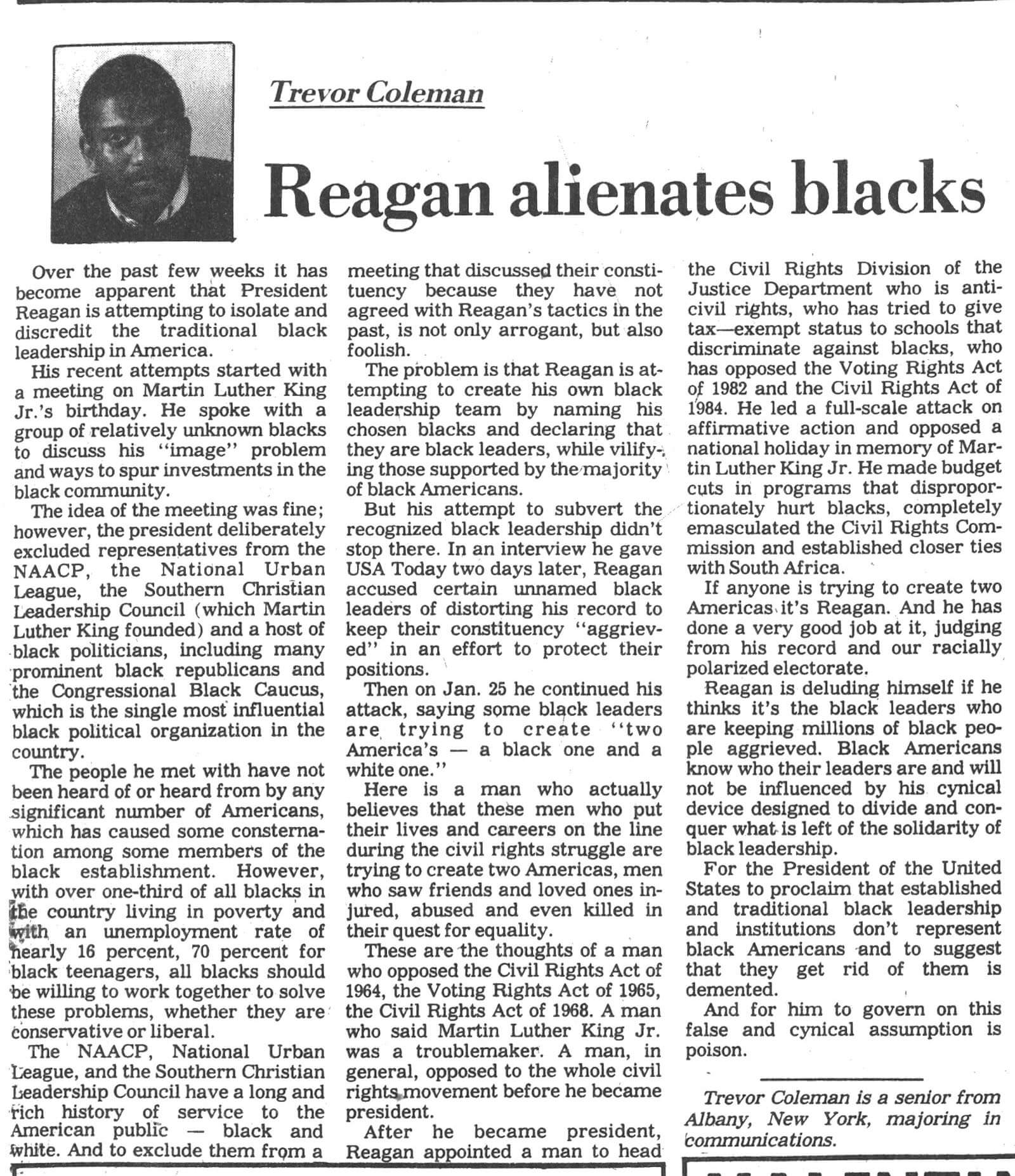 A Trevor Coleman column featured in a February 1985 issue of the Lantern.

It took Coleman more than six years to graduate with his communication major due to financial hardship. “Some quarters I didn't have the money to go. Like a lot of poor students, I’d have to withdraw from classes to get a refund to pay my rent.” Looking back, though, he remembers how people believed in him. “At one point, when I didn't have any more money, the dean waived my tuition and said to me, ‘Trevor, we expect a lot from you. I believe in you.’ Ohio State changed the trajectory of my life."

His hard work earned him a prestigious internship with The New York Times, and a spot in a training program for black journalists after graduation. Coleman went on to an illustrious journalism career that included stints at publications throughout the nation, including the Hartford Courant and Detroit Free Press as an editorial writer and columnist. He was nominated for a Pulitzer Prize in 1992 as the lead writer of the year-long Detroit News series “Who Speaks for Black America?” and has won awards from the National Association of Black Journalists, the Detroit Press Foundation, the Michigan Press Association, the Society of Professional Journalists, Best of Gannett and others. He went on to become a successful author, including co-authoring Crusader for Justice, the best-selling biography of Federal Judge Damon J. Keith, and four college communication textbooks; political speechwriter, including chief speechwriter for the Governor of Michigan and executive speechwriter for the president of the American Bar Association; director of communications for the Michigan Department of Civil Rights; and as a speechwriter and communications consultant for the President of the Kellogg Foundation.

As a young man on a bus to Columbus in 1979, Coleman had sworn to himself that he’d never return to New York unless he was successful. In 2019, he made that return when he accepted a position as chief speechwriter and senior advisor to Kristina M. Johnson, PhD, chancellor of the State University of New York, the largest comprehensive public higher education system in the United States. Johnson will take over the presidency of Ohio State in September 2020. “I left as a poor black kid on my own determined one day to be somebody. It felt good to come back as the person I never saw growing up,” Coleman says.