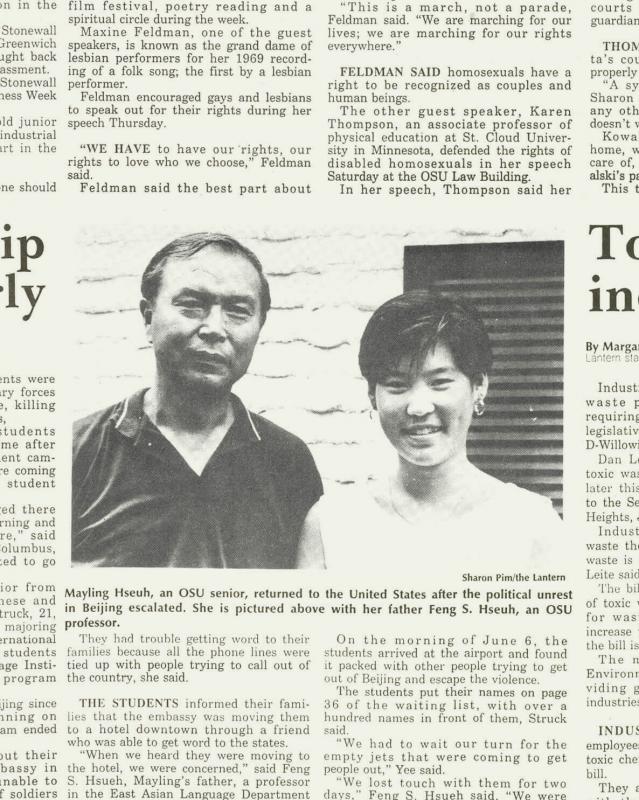 The Chinese government’s brutal crackdown on pro-democracy rallies in 1989 prompted humanitarian outcries from around the globe—including international students and their allies at The Ohio State University.

On June 4, 1989, protests in Beijing’s Tiananmen Square by Chinese students and intellectuals to demand democracy and other reforms were crushed with military force by the Chinese government, which declared martial law. The iconic video of a solitary man blocking Chinese military tanks with his body in Tiananmen Square came to define the courage behind the movement.

At Ohio State, students from China organized to support their compatriots, holding rallies in the Oval with hundreds of students shouting “Long live China! Long live democracy!” Students waved banners showing support for hunger strikers in Beijing and Shanghai and called for Chinese government leaders to resign. A cohort of 135 students also rallied with students from universities throughout the nation at the Chinese Embassy in Washington, D.C. Groups including the Chinese Scholars and Student’s Society and Chinese Student’s Association raised money to assist those whose family members were among the thousands killed or injured in what is now known as the Tiananmen Square Massacre.

The American government took action to protect the Chinese protesters in the U.S., with Democrats in Congress introducing legislation to enable the students to remain in the country past their student visa expiration. 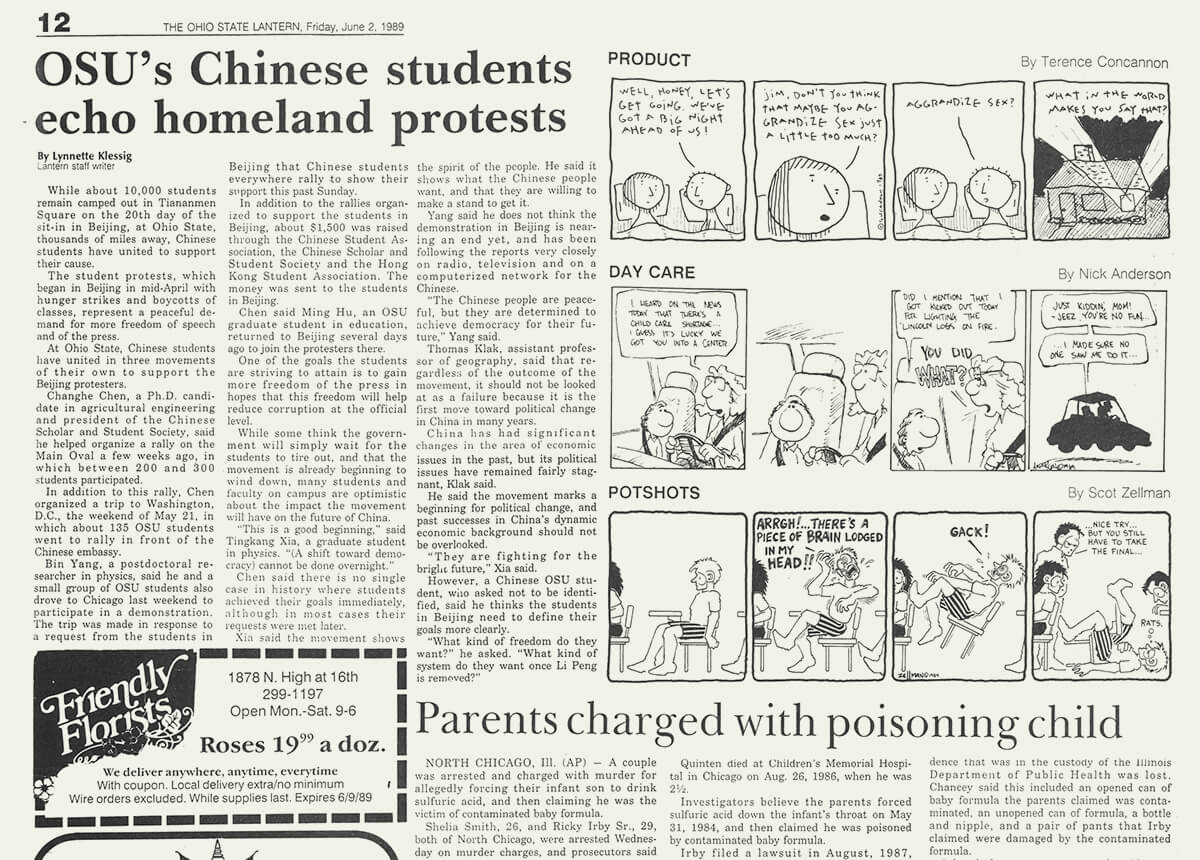 Lantern article about Chinese protests from 1989

The Ohio State students’ actions were not well received by Chinese authorities. In November, the Chinese Embassy refused to pay rent for Ohio State’s Chinese Student Center because of the pro-democracy rallies on campus, effectively shutting down the center. The Chinese government took photos of the protesters and published their names in newspapers. Students worried that they would face prison sentences and possibly death upon returning to China. It was a very real possibility; in fact, Ohio State graduate Xiaoping Lu returned to China in 1989 and died during a protest.

The American government took action to protect the Chinese protesters in the U.S., with Democrats in Congress introducing legislation to enable the students to remain in the country past their student visa expiration. Although President George H.W. Bush vetoed the bill—leading to more campus protests—he did later issue an executive order allowing Chinese nationals who came to the U.S. around the time of the massacre to apply for permanent residence. The executive order became law through the passage of the 1992 Chinese Student Protection Act. Approximately 80,000 people throughout the U.S. became eligible for permanent resident status as a result of the Act.

Four years after the massacre, a campus vigil organized by the Foundation for Human Rights in China attracted over 100 members of the Ohio State community, who lit candles and listened as speakers urged the community to remember the massacre and continue to fight for liberty in China. 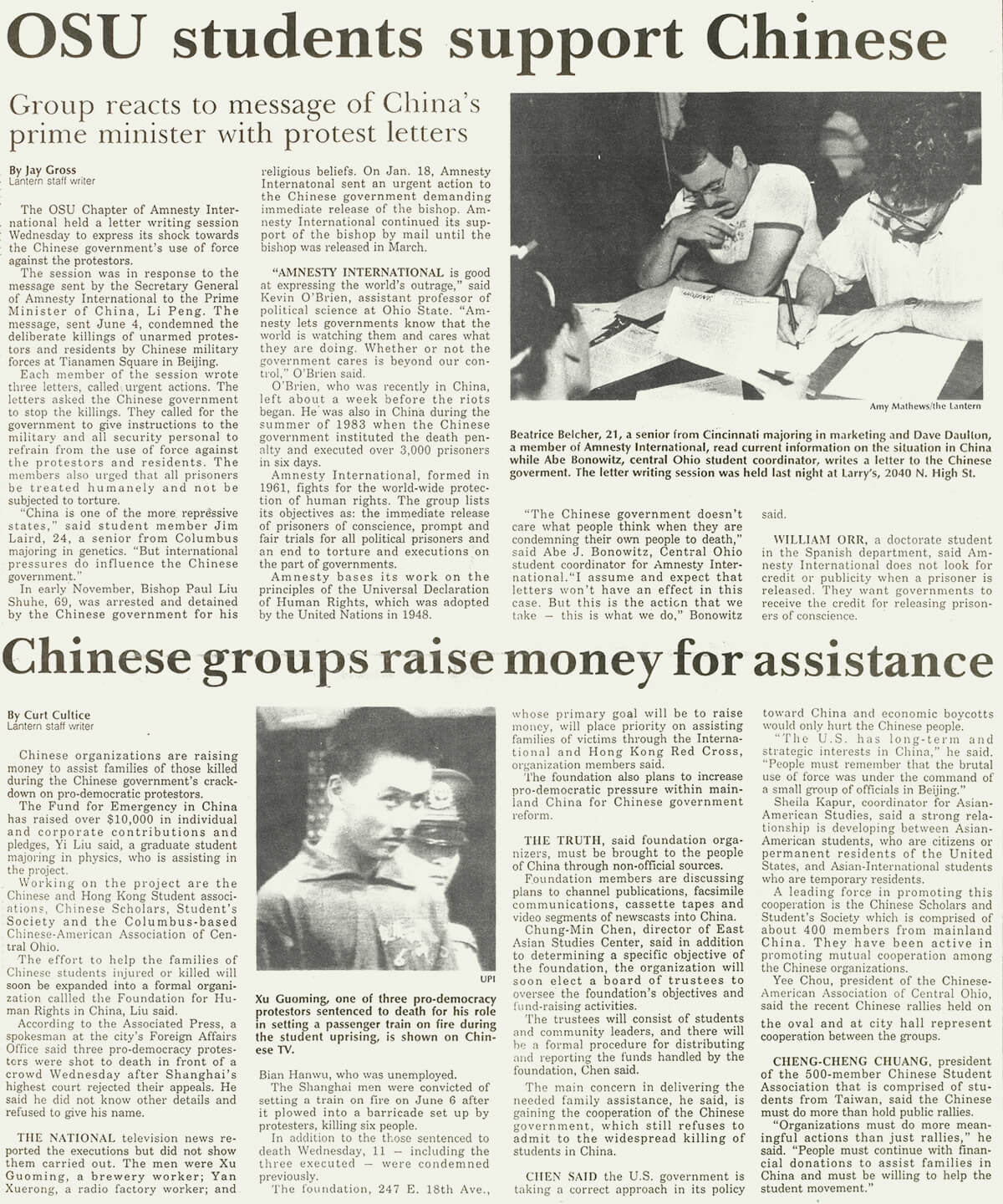